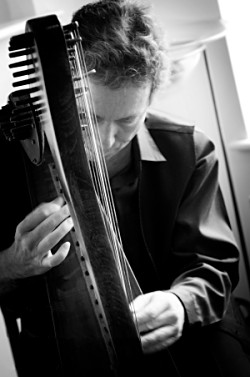 Chris Knowles plays a variety of instruments; his principal instrument is the Celtic harp, and his other main instruments for traditional Celtic music are Irish bouzouki, whistle & low D whistle.
He also often plays other styles of music, mainly on alto and soprano saxophones, and a self-customised 'mandocaster' electric mandolin.

Based in Wales in the UK, Chris is an established solo Celtic harpist, has recorded 22 albums and has been a professional musician for 34 years with Celtic harp as his main instrument, specialising particularly in traditional Celtic music including much Irish, Welsh, and Scottish material, plus some Breton, Manx and Cornish music. In addition he has a repertoire of early/medieval/renaissance music, and also plays some original material and live improvised music.
For weddings & corporate bookings, he also offers a large selection of popular music on the harp.

Chris regularly performs all over the UK and has played in widely varied venues including arts centres, concert halls, theatres, arts festivals, folk festivals, castles, hotels, museums, folk clubs, cruise ships, restaurants, on a number of TV and radio programmes, at open air concerts, green fairs, and 2 Glastonbury festivals. He has also played at an enormous number of private events such as weddings, garden parties, banquets and corporate events.
He was the official harpist at Caernarfon Castle in North Wales for 9 years, performing there several times per week throughout the summer months, and during those years he also played many live events at other castles througout Wales for CADW.

As well as his solo performances, Chris has worked in a number collaborations with other musicians, including numerous performances and recordings with renowned Welsh singer Heather Jones, fiddler Mike Lease, uilleann piper Allan Moller, acoustic guitarist Anthony Griffiths,singer/songwriter Catrin O'Neill,  and in particular a long-running duo with multi-instrumentalist & singer/songwriter Ben Walker. He has been a member of the bands Gwerinos, Hafren, Howling at Ravens, Roam, and North Wales-based local ceilidh band Mooncoin.

Chris also does occasional live session work on saxophones and the mandocaster.

His main harp is a 34-string Camac Ulysse, and he also has an antique 30-string Morley clarsach from c. 1880's.